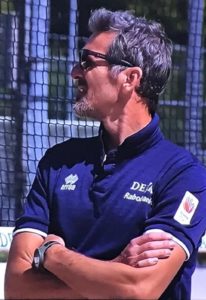 Victor was succesfully coaching women and men in Netherlands and Australia with a couple of podiums and even a World Championship Gold Medal under his belt. Since 2019 he is Head Coach for the men’s side of the national team program. In this interview he speaks about the National Federation Program in the Netherlands.

Victor, you are working as head coach for the National Federation of the Netherlands, aiming at winning medals in international competitions with your national beachvolleyball program. Let’s start with some general questions… Can you quickly describe the structure of the NFs project that you are working in at the moment (number of teams, number of coaches, form of organization etc)?

What are the advantages of a big NF system which includes several teams and coaches hired and paid by the NF? What are the risks or limitations of such a system?

“Ideal” is based on the many factors including vision of the federation, size of the country, number of talented players, number of training venues, amount of coaching knowledge, sponsorship market, position of indoor volleyball in the country etc etc. When Beach Volleyball Team Nederland Started in 2007, the Federation and city of The Hague had a strong vision to put Beach Volleyball on the map in The Netherlands and internationally. They dumped sand in an old volleyball hall, employed full-time coaches and all the talented players moved to The Hague. Since then our program has certainly delivered a lot of international results and given beach volleyball a major boost in visibility and participation in The Netherlands and this has been very close to “ideal” in my opinion for our situation.

One big question/issue is obviously the nomination/selection of players and teams: who should be part of the NF program? Who will play in which tournaments? The two extremes here are “all decision power to NF/coaches” on the one and “ranking points” on the other hand: what are your thoughts on this? What is the “right” solution?

In The Netherlands anybody outside of the National Team is free to enter an international event. For teams within the National program the Head Coach makes the final decision regarding which tournaments the players will play according to their objectives (e.g player development, OG qualification etc). We are however always trying to hold our own country quotas in Holland although teams outside of the program are not obliged to do this if they don’t want to. Freedom to choose is quite an important right for the Dutchies!

Let’s have a closer look at the coaches and the coaching in such a NF system… To which degree can these coaches work together or even be a “team”? What is necessary for such a collaboration? Do all coaches need to have the same philosophy? Do you need a “leader” who makes the big and final calls?

I believe 100% that a group of coaches sharing knowledge and working together can result in a much better development and performance environment for athletes……but……it requires outstanding communication and leadership. In my experience coaches tend to want to keep their knowledge to themselves believing that their knowledge is their competitive advantage. Once the coaches in a program feel valued and secure in their jobs, share the vision of the big team, then they are much more likely to start sharing their knowledge. This can lead to the formation of a “Super-coaching” environment where players benefit from the specific individual strengths of individual coaches. In my experience working with 3 different programs in 2 countries and across 2 sports, some critical factors to the successful cooperation of such a “Coach pool” include;

For each coach as an individual, what are the pros and cons of working in a NF system? Which coach personality is fitting better in a NF system, which is suited better for a “private” team project? Does it maybe also depend on the phase of their career they are currently in?

The pros and cons really depend on what the coach in question wants (to have or to become). Working as head coach in a program like ours for example puts the coach under quite a large spot-light where they are expected to manage the (above mentioned) performance experts. For me personally this is a big benefit but I could also imagine that for some coaches this would be uncomfortable or daunting.

I also think that the pros and cons depend on when a private coach enters a program coaching situation. If the coach has a strong vision regarding how things must be done then it would be easier to do this within a program that is starting out and in need of such a vision. A private coach entering an existing program with an established technical/tactical vision might struggle to express their own vision amongst the existing group which could lead frustration and a negative experience.

I won’t dare to suggest which personalities are suited best for private or program coaching situations, but I will say that a private team coach only needs to sell their message to 2 players whereas a program coach needs to sell it to many more and this requires at least that a coach have an open and somewhat “likeable” personality.

Are “common/shared philosophy” of playing and coaching on the one hand and “individualization” (which is usually considered an important success factor in high-performance sport) on the other hand compatible? Or is this a common dilemma for any NF project? What can be done to solve this?

Christoph, you unsuccessfully tried to hide your bias in the asking of this question! 😀 Firstly there is no one answer to this question. Secondly, I would say within a shared or common philosophy of a program there must be room for the responsible coach to express his/her individual vision. That’s why I mentioned in my previous answers that even within a bigger national team coaching group (or coach pool) that work together, the responsible coach remains exactly that….responsible. To me this means being open to listen to the philosophies within the coach group (never know you might!) but ultimately making decisions the coach believes will produce the desired results…..and the coaching group should respect that. After all if the results are not achieved the coach is often the first to get the cut so you better follow what you believe in!

We have covered different systems form different countries in earlier interviews so you can compare them. Here are the links to these interviews:

You might want to read this interview with Spiros Karachalios about the polish system: https://ibvca.net/2020/the-polish-beachvolleyball-system-interview-with-spiros-karachalios/

Or the interview with Sebastian Beck about the SWISS system: https://ibvca.net/2020/interview-with-sebastian-beck-about-the-swiss-national-federation-program/#more-43

Or the interview with Martin Olejnak about the German system: https://ibvca.net/2020/interview-with-martin-olejnak-about-the-beach-volleyball-program-in-germany/